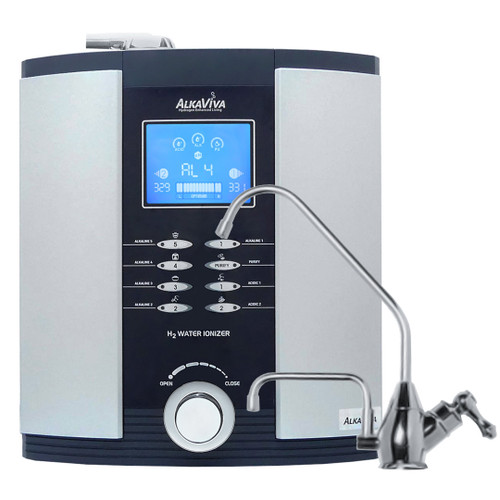 The AlkaViva Athena H2 is one of the top performing 7-plate water ionizers we've tested to date. The original Athena launched in 2007 has been one of the top selling Ionizers in the past decade, the new Athena H2 has been completely updated with a next generation SMPS power supply, AutoAdjust and DARC cleaning. Keeping the smaller and efficient standard, it is redesigned with Hydrogen Infusion Technology that specifically optimizes performance, especially the production of Molecular Hydrogen or H2, hence the new name.

Like its big brother the Vesta H2, the new Athena H2 also produces the highest negative orp of any 7 plate Water Ionizer and can generate remarkable Molecular Hydrogen (H2) levels at drinking water levels of pH 8 to pH 9. Molecular Hydrogen has been scientifically shown to be the most powerful antioxidant known to man with its health benefits detailed in over 600 Medical and Scientific studies to date.

The new AlkaViva H2 series of Ionizers also have the best water filtration we’ve tested in any water ionizer.  The dual water filtration system removes 99.9% of contaminants including chlorine, chloramine, pharma, heavy metals and resilient contaminants like chromium VI and arsenic. The new 2018 model includes UltraWater Smart Chip filters so you know exactly when to change your filters. The result is you get the safest, cleanest, healthiest, best tasting water from any Ionizer on the market today.

Most alkaline water drinkers consume water between pH 8 to pH 9 for the simple reason it tastes better than water with pH 10 or higher and it’s safer too. This meant a compromise in the past, most ionizers boast being able to produce very high pH levels but at the drinking water range they often produce poor H2 and -ORP readings, that is until now, the New Athena H2 produces remarkable –ORP and H2 levels at drinking water levels, for example at a pH of 9 we were able to achieve a -ORP of 780 with the Athena H2 and  a H2 reading of 1.3ppm – This is simply remarkable performance, no other 7-Plate Water Ionizer on the market today can produce such high quality antioxidant water!

10 Reasons to choose the Athena H2

1 - Exceptional Alkaline PH Range - The new Athena H2 is able to produce Alkaline water with a pH of up to 11.4 making it one of the most powerful Ionizers on the market today! Drinking water with an alkalinity of pH 11.4 is not recommended, however at the optimal drinking level range of 8 to 9 pH the Athena H2 can produce a remarkable Trio combination of up to -780 ORP and 1.3 ppm H2, making it the world’s 2nd best performing ionizer for drinking water with the new Vesta H2 only able to better these metrics.

2 - World leading ORP Performance – The Athena H2 can produce an ORP of up to -890 at the highest pH setting and an ORP of -780 at drinking level pH ranges.

4 - 7 advanced SmartDesign Plates / Electrodes - Many over-sized or over-powered electrodes are a a sign of inefficient design. These plates degrade much faster and have questionable performance especially after 18-24 months of use. Other ionizers with nine or more electrodes require A LOT of power to run them. Some even have to slow the flow rate. AlkaViva engineers found that you get the best performance when you have a highly engineered electrode design matched with proper power density. The AlkaViva SmartDesign Electrodes are engineered to deliver maximum efficiency. The Vesta H2 offers you the perfect combination of electrode design and count and the optimal power to run them.

5 - Highest H2 performance at lower, drinkable levels of pH which tastes great! -  Most other systems can create at least a low level of H2. However, any system that creates decent H2 has to run at a maximum setting and produce water above 10 pH to achieve that result. Not only is it questionable in health terms, but water that high in pH tastes bad! It also stresses the electrodes in the machine. The Athena H2 is better than any other system at delivering H2 performance, especially at lower more drinkable - and safer - pH levels.

6 - Fully automatic DARC Cleaning System - Cleans the Ionizer with every use. AlkaViva pioneered DARC cleaning. This is simply the best way to help ensure that the most critical component of the ionizer – the electrodes – stays free of scale buildup.

8 - AutoAdjust - With AutoAdjust the power can be adjusted to the optimal level for your water ensuring you get peak PH, ORP and H2 performance each time you use your Athena H2.

10 – Price – The Athena H2 outperforms all other 7 plate water ionizers on the market in pH, -ORP, H2, Filtration quality, Warranty and Price – at £1499 the Athena H2 is excellent value for money.

Ionizer performance used to be entirely focused on pH/ORP and the number of plates/electrodes an ionizer had. While pH/ORP are exceptionally important in alkalizing and detoxing our bodies  water filtration and Ionizer science has moved on with a focus on H2 performance. H2 has been shown in over 600 studies to give a therapeutic benefit in 140 health conditions and disease models.

Superior Antioxidant Power - Increases in oxygen can produce free radicals, leading to chain reactions and cell damage. Oxidation is literally the aging process while antioxidants prevent or slow down the oxidative damage. Most antioxidants neutralize bad radicals, but they can also neutralize the good ones that your body needs. Molecular hydrogen selectively targets only the damaging oxygen radicals, leaving behind the good radicals. This makes it a superior antioxidant.

Improves Hydration - When H2 molecules combine with and neutralize damaging oxygen radicals, they are transformed into water (H2O) - increasing your cellular hydration. The ionization also creates a light, silky-smooth tasting water that is easy to drink.

Fight Free Radicals - Drinking hydrogen-rich alkaline water is the perfect way to mount a defence against free radicals, which are responsible for oxidization – or decay – within our bodies.

Gum and dental health – A 2014 study showed that hydrogen water can improve gum health, and also help to neutralize acids in your mouth following a meal or snack. For more information see - http://www.ncbi.nlm.nih.gov/pmc/articles/PMC4078318/

Hydrogen Water Effect On Diabetes - In 2008, a team of Japanese researchers carried out an experiment using 30 subjects with type 2 diabetes. Over an eight week period, the subjects who were given hydrogen-rich water to drink on a daily basis presented with greater levels of improvement in their diabetes-related symptoms. The implications of this research are pretty far-reaching and encouraging! For more information see - http://www.ncbi.nlm.nih.gov/pubmed/19083400 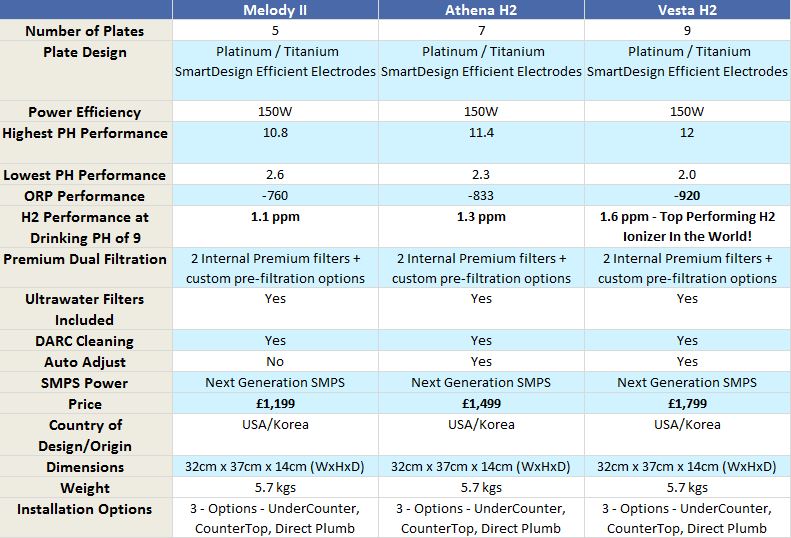 In this detailed 36 minute video Cathleen Lograsso of Alkalinewaterplus.com compares the all new AlkaViva H2 range, specifically the Athena H2 against the Enagic / Kangen, Tyent and older Athena and Vesta models. The results are remarkable. You can read her full report here where she details the performance of each model at each pH setting for ORP and H2.

The new H2 range of AlkaViva Ionizers are designed and developed to the highest possible international standards with 16 top certifications including ISO 9001 and 14001, UL standard for Low voltage electrical, NRTL, CE and KFDA.

*Achieving high and low pH, ORP and H2 levels depends on the quality of the source water. Results can vary depending on mineral concentration of water, hardness or softness of the source water, initial pH level of water and speed of water flow. AlkaViva water ionizers produce consistently higher levels of pH, ORP and H2 than other brands tested. We will guarantee if a customer can show in the first 30 days after purchase that an AlkaViva ionizer does not outperform any other brand ionizer using the same number of plates and the same water source, then we will gladly take the ionizer back and issue a refund.

How long does delivery take?

Deliveries to the UK are sent with a Free Next Working Day service* that operates from Monday to Friday. This timeframe increases to 2 days for UK offshore islands and Scottish highlands.

Deliveries abroad will vary in length depending on the destination, for more specific information please contact us.

How much will delivery cost?

All orders destined for the UK with a total value of £100 or more are elligible for Free Delivery. Orders with a lower value will have a standard delivery charge of £3.95.

For a full list of all our available delivery options, please see our delivery information page.

×
!
Compare
You have selected products to compare.
View Products